In My Mother’s Skin, a feature film by director Kenneth Dagatan and a co-production between Epicmedia and Black Sheep productions from the Philippines, and Singapore’s Zhao Wei Films, was selected to receive one of the two ICOF grants for this year, and will be receiving 6.5 million pesos to be used in their qualified Philippine production expenditures.

Set in postwar Philippines in 1946, In My Mother’s Skin follows the fantastic journey of a young girl to protect her mother, while protecting herself from her. This project was also chosen to be part of the Bucheon International Fantastic Film Festival - NAFF Project Market in 2021 where it received the Discovery of Asia Award. It received the CreatePH Project Development Fund in 2021.

Another ICOF grantee, feature-length project The Gospel of the Beast,  is being directed by Sheron Dayoc under Filipino production companies Southern Lantern Studios and Thinker Bulb Productions, in collaboration with  E & W Films from Singapore. It will be receiving a grant of 8 million pesos for its eligible Philippine expenses.

The Gospel of the Beast is a coming-of-age film about a teenage boy, who in search of his father has found something more than he bargained for, and has lost himself in the process. The project was a part of the Fiction Lab under the Full Circle Lab PH last year.

Inaugurated in 2020, the ACOF will have two new projects added to its list of grantees this year. Both selected projects will be receiving a 2.5 million peso fund each, fifty percent of which must be spent on qualified Philippine production expenditures. Both selected ASEAN films is a co-production with a Filipino production company, and is helmed by a director from an ASEAN member country (Philippines, Vietnam, Lao PDR, Myanmar, Indonesia, Malaysia, Singapore, Thailand, Brunei Darussalam, and Cambodia).

Picturehouse, is a film project from Vietnam by director Minh Nghiem Nguyen Vo. It is a co-production among four countries–Daluyong Studios from the Philippines, East Films from Vietnam, Girelle Production from France, and Add Oil Films from Malaysia.

The feature-length project was a part of the Full Circle Lab PH Fiction Lab Southeast Asia last year, and was selected to join the Asian Project Market (APM) in the Busan International Film Festival in 2019.

Thai feature film project Arnold is a Model Student by director Sorayos Parapan is a co-production among ACC Cinematografica Films from the Philippines, Minimal Animal from Thailand, Dibona Films from France, Volya Films from the Netherlands, and Giraffe Pictures from Singapore.

Drag Race Philippines and its companion show, Untucked! was selected as FLIP grantee for 2021 Cycle 3. The reality series is a co-production between World of Wonders Productions of the US and Fullhouse Asia Productions from the Philippines, and is being directed by Fifth Solomon and Arnel Natividad, and Ice Seguerra for Untucked!

The reality series will be granted a 20% cash rebate capped at PHP 10 million on their eligible expenses in the Philippines. The cash rebate will be given to the Filipino line producers involved in the approved foreign production.

FDCP Chairperson and CEO Liza Diño expressed her excitement for FilmPhilippines’ new batch of grantees, “Congratulations to all the selected awardees for the FilmPhilippines Incentives Program 2021 Cycle 3. These projects are all promising and worth waiting for, and are fitting projects to cap the 2021 selection. All eighteen grantees of the three cycles of the production incentives program are our active share in the lofty goal of making quality projects a norm, not just in the Philippines, but also across Southeast Asia.”

“For the Philippines, this also opens opportunities for Filipino film workers, including line producers, by fostering internationalization and continuous professional growth. This incentives program also aims to create jobs for our local pool of film workers, and generate revenue for service providers in the country,” she added.

The FilmPhilippines Incentives (FPI) Program is now accepting applications for its Cycle 1 of 2022 batch of grantees. The call is open to international production companies in business with a Philippine film producer/company on an ongoing project. Now in its third year, FPI comes with an updated set of guidelines which you can download at this link along with the application form: www.filmphilippines.com. 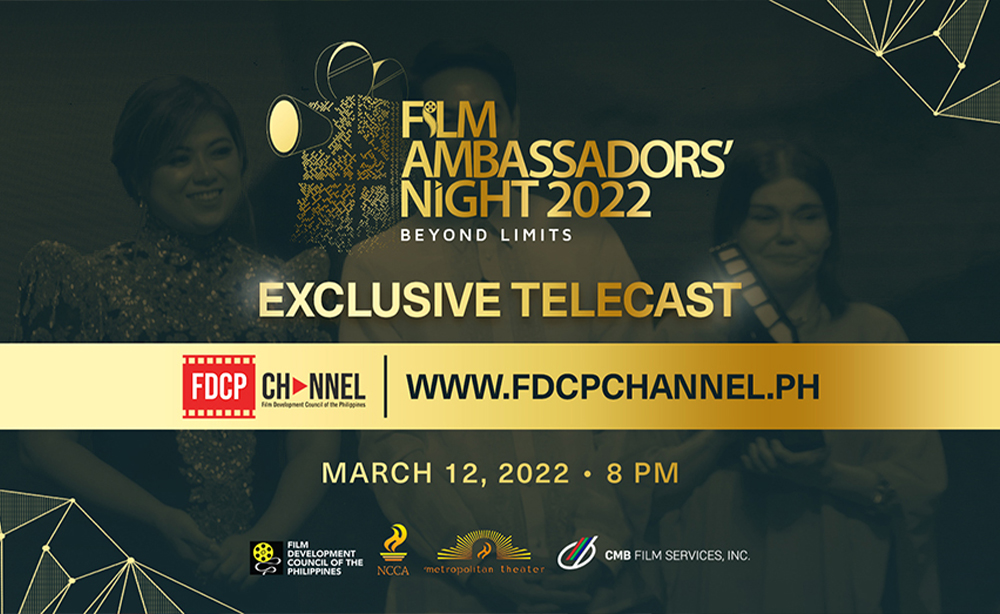